Sometimes bees need a change in their lives. The hive becomes too cramp and they need more room to store honey and pollen. Or sometimes there is an urge to want to reproduce. There are several reasons why a colony is looking for change and their solution is to swarm. However, there are a few bee swarming signs to look for.

Swarming is the process of a single colony splitting into two when the queen bee leaves with a large group of worker bees. Swarming is a honeybee’s natural response to overcrowding in the colony. It’s essential to the bees’ survival. An overcrowded hive can risk the colony’s health.

In a swarm, 60% of the worker bees will follow the current queen bee to a new hive; this can be tens of thousands of bees leaving a hive at once. There is also a phenomenon called an afterswarm (also known as cast swarm) which is a smaller swarm led by a virgin queen.

What time of the day do honeybees swarm?

Swarming typically occurs in the late spring and early summer. More specifically, swarming can occur in the warmer hours of the day- between 10AM and 2PM. This is when the colony will be most active. If the swarm occurs in the spring, there will be enough time for the new colony to store food for the winter. Those that swarm in the late summer risk the colony’s overall survival and health as pollen and nectar may be in short supply. This means they will run out of honey before winter ends.

What happens during a swarm?

When a colony gets too crowded and resources become scarce, the worker bees prepare to swarm. The workers that care for the queen begin to feed her less so she will lose weight to fly. Every colony needs to have a queen bee. At the same time, some workers will begin to raise a new queen by feeding a chosen larva large quantities of royal jelly. When the virgin queen is ready, the swarm begins.

More than half of the colony will leave the hive, nudging the queen to go with them. The swarming bees will include the queen (or sometimes several virgin queens, worker bees, and some drone bees). After the swarm leaves the original hive, they fly around briefly and then cluster on a tree limb, shrub, or another object. The queen is in the center of the cluster while the workers surround her. The cluster will occur close by the original hive. They will then remain stationary for some time. During this stationary time, scouting bees will venture out to look for a new nest site while the rest of the bees tend to the queen by keeping her safe and cool. Scouting may only take one hour or several days depending on the weather.

When an appropriate site has been discovered, the cluster will guide their old queen to the new location and get her settled. The workers will begin to produce honeycombs and then resume their original duties inside the hive.

How long do swarms stay?

If you find that a honeybee swarm is stationed on your house, tree, deck, etc., don’t panic! You do not need to take any action because the swarm is temporary. Give the swarm time to find a new, permanent home and they will leave on their own. This can be as little as an hour and up to a few days.

If you find that a swarm is present in a high traffic area, call a local beekeeper for options to catch the swarm. Connect with your local beekeepers’ club for more information.

Typically, honeybee swarms are not dangerous. Before swarming, honeybees are fed which reduces their ability to sting. When swarming, honeybees are at their most docile (or passive). They are far more vulnerable when they are away from their hive and are far less likely to attack unless provoked. Also, before leaving their original hive, the bees eat as much honey as they can and their bellies are full. Full bees are gentle because they physically can’t tilt their abdomens to sting. When you see a swarm, they are not protecting babies or food- another reason why they aren’t aggressive.

This is a great time to observe the bees from a safe distance. Of course, if you’re allergic to bees, stay away from the swarm.

Is it possible to catch a swarm?

For experienced beekeepers, collecting swarms is the preferred method for populating hives. The best time to catch a swarm is after the bees leave their original hive and form a cluster on a nearby branch or shrub. It’s important to collect the swarm before the bees find a new home and start producing honeycomb. Should the swarm start building honeycombs in their new home, they will be defending their colony and it will be more difficult.

Because the swarms are already local, they are guaranteed to survive the winters. There is also evidence that the colony is strong. Another benefit to catching swarms is that it helps grow a genetically-strong honeybee population.

How do I prevent a swarm with my hive?

There are two reasons for a swarm: overcrowding and reproductive concerns.

A swarm due to overcrowding occurs when bees feel overcrowded in their hive. In this situation, it’s best to add a super to the hive. A super is short for superstructure, which refers to a box placed on a beehive for bees to store honey.

A super does not solve the issues that come with a reproductive swarm. In the spring, the bees will actively collect pollen which will cause the rearing of more brood to build up more workers for the season. These new bees require more food and they eat the honey stored for the winter. When the honey is gone, there is more room to create more brood until they reach a limit. This is when the queen stops laying eggs and honey is stored where the brood nest once was. When the brood nest is filled with honey, swarm cells begin to be built. Once those cells are capped, the queen decides to leave the hive with a majority of the bees.

If you notice your bees preparing to swarm just before the main nectar flow, you will need to split your hive. Some beekeepers choose to split the hive with the old queen.

It’s hard to predict when a swarm can happen. Bees can have an instinctual desire to create a new colony. One thing beekeepers can do it to plan to split the hive in the springtime. Strong colonies that made it through the winter are more likely to swarm during the warm weather. By actively splitting the hive, there are more resources for each colony.

It’s also important to have regular inspections in the spring to be sure there is plenty of available room and that the queen is still productive. Also, be aware of the weather since honeybee activity is dependent on it.

Finally, if you do find the bees to have swarmed, you can retrieve them and place them in another empty hive. Some beekeepers suggest having an empty hive set aside in case of an emergency swarming. 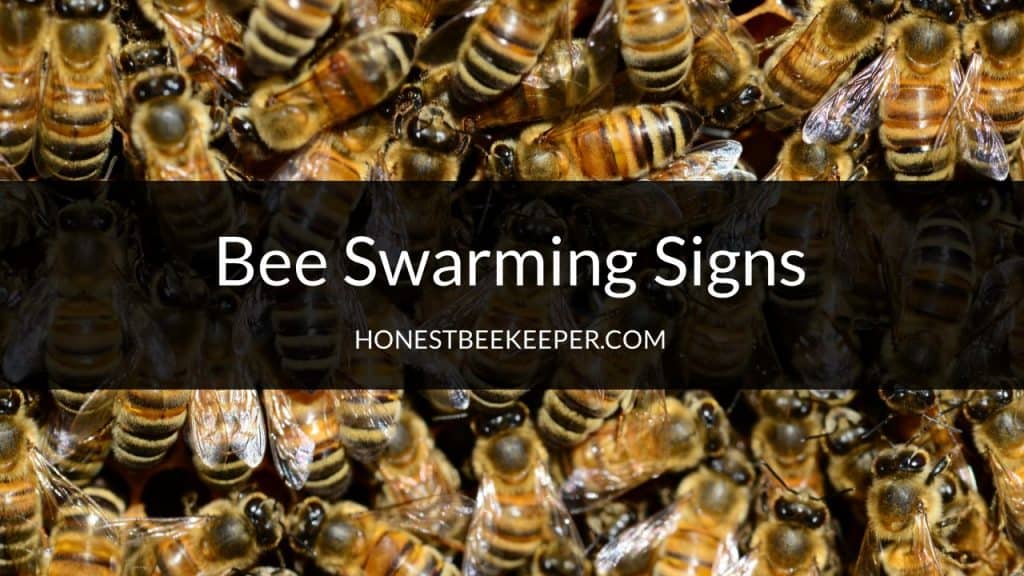